The Dyson Corrale is heavy, industrial-looking and expensive but it performs like nothing we’ve used before. We love its cordless nature and the freedom this gives, and our hair would likely thank us (if it could) because it’s in the best condition of its life. Does this make it worth £400 though? In a word, no. We shouldn’t have to make any sacrifices in terms of style and size when paying such a premium but – as is the case with many Dyson products – once you go Dyson, you rarely go back.

Pros
Cons
Where to Buy Prices are accurate at the time of publishing and are subject to change.

It’s a strange business, reviewing beauty products and tools when we’ve nowhere to go but – despite being in isolation –  we’ve spent the past four weeks putting the new Dyson straighteners through an in-depth test for our Dyson Corrale review.

It ticks many of the boxes you’d expect from a new Dyson product – it’s unlike anything we’ve used before, both in terms of looks and performance and it costs a small fortune for the privilege. However, unlike the superb Dyson Supersonic, the Dyson Airwrap (and many of its fans and humidifiers), the Britsh-engineering giant has taken a number of missteps that mean the Dyson Corrale doesn’t quite live up to the rest of the range.

That’s not to say it’s a bad product, far from it, but when the bar – and the budget – has been set so high, the expectations are equally as lofty.

We’ve been testing the best hair dryers, straighteners and curling tongs – among other gadgets and appliances – for more than a decade and until now, nothing has come close to the performance of GHD. Every iteration of its iconic straighteners has been a significant improvement on the last, and the GHD Platinum Plus styler has set the benchmark by which all competitors are now compared. You can read why in our GHD Platinum Plus review.

READ NEXT: GHD Platinum Plus review

Since Dyson made a somewhat surprising entry into beauty in 2016, with the launch of its Supersonic hair dryer, the British firm has since launched the Airwrap – a curler-cum-dryer – and now the Corrale, its first pair of straighteners.  The Corrale, which is a play on the word corral or to “gather things together”, uses a series of flexing panels coated in copper alloy plates. These plates flex and curve to gather strands of hair together before applying an even level of tension as it passes over each section.

Sensors inside the Corrale regulate the heat of these plates, up to a reported 100 times a second, and the combination of these features is said to reduce the amount of heat required to straighten your hair, which, in turn, reduces the damage. A 50% reduction, according to Dyson.

We’ve spent the past four weeks putting Dyson’s various claims to the test to see whether these straighteners – or any straighteners for that matter – are really worth £400.

To account for the four-cell Lithium ion battery needed to add a cordless option to the Corrale, the straighteners are bulky and heavy. On its own, the Corrale weighs 561g. By comparison, the GHD Platinum Plus comes in at 301g. Even when the cable and plug are included in the GHD model’s weight, it still comes in at 100g less than the cordless Corrale.

This screen sits above two temperature control buttons, the power button and a safety latch.

This latch keeps the Corrale’s plates closed and locked out of harm’s way when they’re cooling down.

On the end of the Corrale is a magnetic charging point which can be attached to a cordless stand, or to a 4.34-metre cable.

The Corrale ships with a heat mat that doubles up as a carry case.

What’s more, when the cable and power pack with plug is added to the Corrale, it tips the scales at an incredible 1.03kg.

For all the benefits you get of being able to use the Corrale cordlessly, this portability is called into question when you factor in the charger.

Particularly if you’re planning on a week abroad – when we’re allowed to leave our houses again – and want to take the Corrale with you, you’ll use up a precious chunk of your baggage allowance just taking a charger.

This battery – coupled with the various buttons, latch, flight-safe mode and OLED screen – means the Corrale is also larger overall, particularly next to the GHD Platinum Plus.

We tested the grey and fuschia model for this review and while online images make it look attractive, the reality is somewhat different.

Its metal plates have a harsh, industrial quality to them, not too dissimilar to the keys on a Stylophone. Readers over a certain age will get this reference.

As a result, they lack the elegance of the GHD’s grey plates and the overall look seems unfinished.

The smooth plastic casing feels thin and cheap and the mixture of the two materials, and the flexing plates, create clicking noises as the plates are opened and closed.

The one redeeming design feature is the magnetic charging base.

It’s solid and luxurious – if you ignore the plastic stand – and there’s a reassuring sophistication to the use of magnets. Something we love when switching attachments on the Dyson Supersonic, for instance.

Yet where the Corrale misses the mark with its design, it nails it with its performance.

Solid plates on the GHD Platinum Plus, and other traditional straighteners, clamp your hair tightly and use heat to break down bonds in the hair to change its texture and make it mouldable. This strips many of the natural oils and protective proteins from the hair, causing it to become dry and damaged. Such straighteners also tend to pull and snap the delicate ends of hair, adding further to the damage.

By comparison, the Corrale’s plates flex and move around the hair to provide tension where it’s needed while protecting the ends. It slides the plates over the hair shaft before loosening its grip to release the ends gently. Not only does this reduce the reliance on heat, using tension to smooth each section instead, but the way the plates flex and pull the hair together helps tame flyaways. Ionising properties of the plates’ tourmaline edges then reduce static and the result is a smooth, shiny style that leaves hair feeling strong and healthy.

That’s not to say the Dyson Corrale doesn’t use any heat, of course. It still needs heat to mould the hair, but because this heat is combined with greater tension, it’s possible to create the same styles at lower temperatures. You can tell it’s using less heat because the hair doesn’t feel as hot to the touch after it’s been straightened.

The GHD Platinum Plus has one setting – 185℃. A setting GHD claims is the optimum temperature needed to mould the hair while causing minimal damage. With the Dyson Corrale, we regularly achieved our desired looks at 165℃. Having higher temperature options, therefore, was not a necessity for our thin, mid-length hair, but they do make the Corrale better suited to a wide range of hair types and thicknesses.

By corraling the hair, the Dyson Corrale manages to also do all this faster than its rivals. Straightening our hair after rough drying typically takes about five minutes, on average, with the GHD Platinum Plus. With the Corrale, it took just two.

This increase in speed further reduces the exposure to heat and it goes some way towards making the Corrale’s extra weight more bearable and less uncomfortable when straightening it. The same can’t be said for curling our hair though. Twisting and turning such a large appliance gave us cramps in our hands, but the results were incredible and the lack of a cord helped lessen this impact a little.

READ NEXT: How to curl hair with straighteners

While we can’t quantify whether or not the Dyson Corrale has reduced damage to our hair by 50%, we can anecdotally say our hair has never looked and felt so good and healthy. It feels softer and smoother and we’re seeing fewer snapped ends falling on our shoulders and legs.

Our hair quality also benefits from the fact the Dyson Corrale doesn’t force it into submission. Straightening our hair usually makes it look limp and lifeless, but the Corrale achieves the same level of shine and finish while leaving our hair bouncy and full of volume. 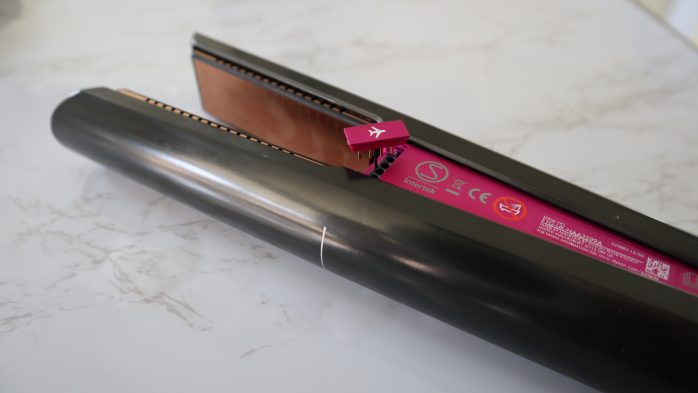 The battery on the Dyson Corrale lasted 40 minutes in our tests, which is 10 minutes more than Dyson claims it does. This is impressive and meant we could get a week’s worth of daily styling on a single charge. This will be perfect for a weekend trip or similar, especially if you don’t want to take the entire cable and power pack with you.

It can also be taken on flights, if you remove the flight-safe connector on the side of the Corrale. But, be careful. Firstly, this connector is delicate and fiddly and we almost snapped it off a couple of times. Secondly, you need to put your hand between the plates to unclip it so make sure the plates aren’t hot at the time.

When not in use, the Corrale sits on its charging stand and takes an hour and 10 minutes to charge to full capacity. You can also get it up to 90% with a 40-minute charge, should you need it.  Of course, if it does die mid-style, you can just plug it into the mains via the cable but be warned, the cable and its power pack are ridiculously long and large making them a pain to store. We recommend you keep it charged on the stand when not in use.

The Dyson Corrale is heavy, industrial-looking and expensive but it performs like nothing we’ve used before. We love its cordless nature and the freedom this gives, and our hair would likely thank us (if it could) because it’s in the best condition of its life. Does this make it worth £400 though? In a word, no. We shouldn’t have to make sacrifices in terms of style and size when we’re paying such a premium.

Playing devil’s advocate, you could say you can’t put a price on healthy, strong, well-styled hair but we don’t think we’d value it as high as £400. You could buy two GHD Platinum Plus stylers for that, and have change to spend on heat defence sprays and split-end treatments.

But – as is the case with many Dyson products – once you go Dyson, you rarely go back.

Don’t miss out! Sign up for the mamabella newsletter today

Victoria is founder and editor-in-chief of mamabella, freelance journalist and Mum. She has a passion for empowering people to feel beautiful whatever their age, size, skin type and budget

This site contains affiliate links to recommended products. We may receive a commission for purchases made through these links. We will not recommend anything we don't believe in and we are not paid by brands to include specific products unless explicitly stated.

Ingredient Spotlight
What does Vitamin C do to your skin? We look at the science and serums When many of us think of Vitamin C we tend to think of oranges and...
Read More >
Updated

Deals
The 2020 Glossybox Beauty Advent Calendar waitlist is open! It goes without saying that there is likely limited stock of many of...
Read More >